SPRINGFIELD, Mass. – The defending Eastern Conference Champion Springfield Thunderbirds, in conjunction with the American Hockey League, released their full schedule for the 2022-23 regular season on Thursday. The season marks the second season of play for the T-Birds in their affiliation with the NHL’s St. Louis Blues.

For the third straight playing season, the Thunderbirds will begin their regular season on home ice when they play host to the Bridgeport Islanders on Saturday, Oct. 15 at 7:05 p.m. inside the MassMutual Center for Opening Night. It marks the first of six contests on home ice against Bridgeport. Other matchups in Springfield between the two clubs will take place on Friday, Oct. 28; Friday, Dec. 30; Friday, Jan. 6; Monday, Jan. 16; and Saturday, Feb. 4.

The Thunderbirds will face every Eastern Conference team at least twice during the 2021-22 regular season, with the exception of the Cleveland Monsters and Toronto Marlies. For the first time, the AHL season will consist of all 32 clubs playing 72 total games (36 home, 36 away).

Another “first” for the Thunderbirds is the inclusion of six games (three home, three away) against a trio of Central Division opponents: the Grand Rapids Griffins, the Milwaukee Admirals, and the Rockford IceHogs. This marks the first time the T-Birds will ever face a Western Conference opponent during the regular season. The Central Division teams will all visit Springfield in the opening 10 days of December, with Rockford coming into the MassMutual Center on Friday, Dec. 2; Grand Rapids stepping foot in Springfield on Friday, Dec. 9; and Milwaukee completing the trio of games on Saturday, Dec. 10.

The season series against Providence begins during opening weekend, as the Bruins visit the T-Birds for a 3:05 p.m. puck drop on Sunday, Oct. 16. The other meetings in Springfield will take place on Saturday, Oct. 29; Saturday, Nov. 5; Friday, March 10; Saturday, March 18; and Friday, April 14.

The first home-ice matchup for the T-Birds in the I-91 rivalry against the Wolf Pack is slated for Friday, Nov. 4 at the MassMutual Center. Other I-91 series dates in Springfield are set for Wednesday, Dec. 28; Wed., Feb. 22; Friday, March 3; Wednesday, March 8; and Saturday, April 15.

The Thunderbirds will also play 12 games (6 home, 6 away) against teams from the AHL’s North Division, including a rematch of the thrilling seven-game 2022 Eastern Conference Finals series against the Laval Rocket on Saturday, March 11 at the MassMutual Center.

﻿Single game tickets for the 2022-23 regular season will go on sale at a later date. 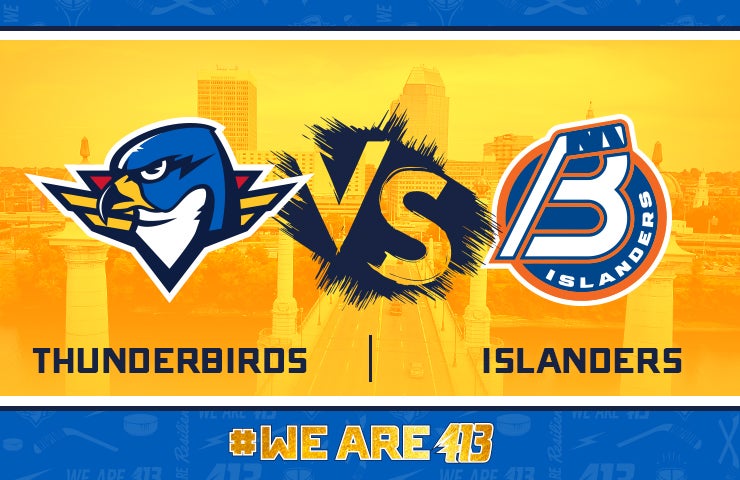